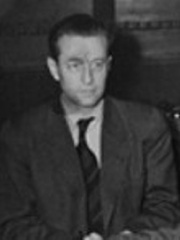 August Franz Anton Hans Fritzsche (21 April 1900 – 27 September 1953) was the Ministerialdirektor at the Propagandaministerium (Reich Ministry of Public Enlightenment and Propaganda) of Nazi Germany. He was the preeminent German broadcaster of his time, as part of efforts to present a more popular and entertaining side of the Nazi regime, and his voice was recognised by the majority of Germans.Fritzsche was present in the Berlin Führerbunker during the last days of Adolf Hitler. After Hitler's death, he went over to the Soviet lines in Berlin to offer the surrender of the city to the Red Army on 1 May 1945. Read more on Wikipedia

Hans Fritzsche was a Nazi propagandist who was most famous for his radio broadcasts.

Among politicians, Hans Fritzsche ranks 1,320 out of 15,710. Before him are Sogdianus of Persia, Gaspard II de Coligny, Senusret III, Henri, Count of Chambord, Anastas Mikoyan, and Senusret I. After him are Hussein bin Ali, Sharif of Mecca, Ludwig III of Bavaria, Berke, Mahmoud Ahmadinejad, La Malinche, and Libius Severus.