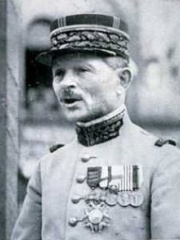 Maxime Weygand (French pronunciation: ​[vɛɡɑ̃]; 21 January 1867 – 28 January 1965) was a French military commander in World War I and World War II. Born in Belgium, Weygand was raised in France and educated at the Saint-Cyr military academy in Paris. After graduating in 1887, he went on to become an instructor at the Cavalry School at Saumur. During World War I, Weygand served as a staff officer to General (later Marshal) Ferdinand Foch. Read more on Wikipedia

Weygand was a French general who was the supreme commander of the Allied forces in France in World War II. He is most famous for his "Rallying the French" speech, which he gave on June 18, 1940, after the Germans invaded France.

Among MILITARY PERSONNELS In Belgium

Among military personnels born in Belgium, Maxime Weygand ranks 3. Before him are Charles Martel (688) and Johann Tserclaes, Count of Tilly (1559). After him are Alfred I, Prince of Windisch-Grätz (1787) and Adrian Carton de Wiart (1880).