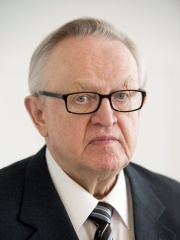 Martti Oiva Kalevi Ahtisaari (Finnish: [ˈmɑrtːi ˈʔoi̯ʋɑ ˈkɑleʋi ˈʔɑhtisɑːri] (listen); born 23 June 1937) is a Finnish politician, the tenth president of Finland (1994–2000), a Nobel Peace Prize laureate, and a United Nations diplomat and mediator noted for his international peace work. Ahtisaari was a United Nations special envoy for Kosovo, charged with organizing the Kosovo status process negotiations, aimed at resolving a long-running dispute in Kosovo, which later declared its independence from Serbia in 2008. In October 2008, he was awarded the Nobel Peace Prize "for his important efforts, on several continents and over more than three decades, to resolve international conflicts". Read more on Wikipedia

Ahtisaari was a Finnish diplomat and the President of Finland from 1994 to 2000. He was awarded the Nobel Peace Prize in 2008 for his efforts to resolve the Kosovo conflict.

Among politicians, Martti Ahtisaari ranks 1,163 out of 15,710. Before him are Margaret of Parma, Louis, Dauphin of France, Yitzhak Shamir, Andrei Zhdanov, Cnut the Great, and Frederick III, Elector of Saxony. After him are Ptolemy V Epiphanes, Takeda Shingen, William II of the Netherlands, Abdelaziz Bouteflika, Justin II, and Afonso V of Portugal.