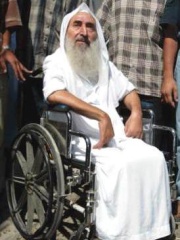 Sheikh Ahmed Ismail Hassan Yassin (Arabic: الشيخ أحمد إسماعيل حسن ياسين; 1 January 1937 – 22 March 2004) was a Palestinian politician and imam who founded Hamas, a militant Islamist and Palestinian nationalist organization in the Gaza Strip, in 1987. He served as the organization's spiritual leader after its founding. Yassin, a quadriplegic who was nearly blind, had been reliant on a wheelchair due to a sporting accident at the age of 12. Read more on Wikipedia

Ahmed Yassin is most famous for being the founder and leader of Hamas, an Islamic terrorist organization.

Among religious figures, Ahmed Yassin ranks 491 out of 2,238. Before him are Pope Soter, Jehoshaphat, Saint Spyridon, Antipope Clement VII, Ansgar, and Pope Silverius. After him are Korah, Peter the Hermit, Pope Stephen I, Pope Miltiades, Pope Caius, and Saint Eustace.