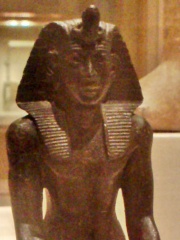 Necho II (sometimes Nekau, Neku, Nechoh, or Nikuu; Greek: Νεκώς Β'; Hebrew: נְכוֹ‎, Modern: Nəkō, Tiberian: Nekō) of Egypt was a king of the 26th Dynasty (610–595 BC), which ruled out of Saite. Necho undertook a number of construction projects across his kingdom. In his reign, according to the Greek historian Herodotus, Necho II sent out an expedition of Phoenicians, which in three years sailed from the Red Sea around Africa to the Strait of Gibraltar and back to Egypt. Read more on Wikipedia

Necho II was a pharaoh of the 26th dynasty of Egypt, who ruled from 610 to 595 BC. He was the son of Psamtik II and Queen Tetisheri. Necho II is most famous for his campaign in the Levant, which resulted in the capture of Jerusalem and the annexation of several Syrian and Palestinian territories.

Among politicians, Necho II ranks 2,276 out of 15,710. Before him are Lu Xun, Harald Greycloak, Romano Prodi, Emperor Itoku, John of Brienne, and Isabella Jagiellon. After him are Isaias Afwerki, Edward Rydz-Śmigły, Vasily II of Moscow, Śuddhodana, Vincent Auriol, and Isma'il Pasha.

Others Deceased in 595 BC