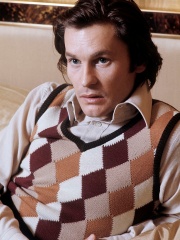 Helmut Berger (German pronunciation: [ˈhɛlmuːt ˈbɛʁɡɐ] (listen); born Helmut Steinberger; 29 May 1944) is an Austrian film and television actor. Berger, who often portrayed narcissistic and sexually ambiguous characters, was one of the stars of the European cinema in the late 1960s and 1970s. Berger is most famous for his work with Luchino Visconti, particularly in his performance as King Ludwig II of Bavaria in Ludwig, for which he received a special David di Donatello award, and his performance in The Damned for which he was nominated for a Golden Globe Award. Read more on Wikipedia

Helmut Berger is most famous for his role as the young and handsome gigolo in the 1972 film, "The Damned."