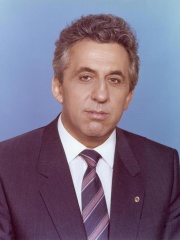 Egon Rudi Ernst Krenz (German pronunciation: [ˈeːgɔn ˈkʁɛnts]; born 19 March 1937) is a former East German politician who was the last communist leader of East Germany during the final months of 1989. He succeeded Erich Honecker as the General Secretary of the ruling Socialist Unity Party of Germany (SED), but was forced to resign only weeks later when the Berlin Wall fell.Throughout his career, Krenz held a number of prominent positions in the SED. He was Honecker's deputy from 1984 onward, until he succeeded him in 1989 amid protests against the regime. Krenz was unsuccessful in his attempt to retain the communist regime's grip on power, and was forced to resign some weeks after the fall of the Berlin Wall. Read more on Wikipedia

Among politicians, Egon Krenz ranks 1,670 out of 15,710. Before him are Anchises, Jean-Claude Juncker, Toghon Temür, Otto of Greece, Dzhokhar Dudayev, and Antonio López de Santa Anna. After him are Ptolemy VII Neos Philopator, Carlos I of Portugal, Abu Ayyub al-Ansari, Axel Oxenstierna, Pleistarchus, and Tarja Halonen.