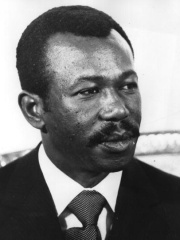 Mengistu Haile Mariam (Amharic: መንግሥቱ ኀይለ ማሪያም, pronunciation: [mənɡɨstu haɪlə marjam]; born 21 May 1937) is an Ethiopian politician and former army officer who was the head of state of Ethiopia from 1977 to 1991 and General Secretary of the Workers' Party of Ethiopia from 1984 to 1991. He was the chairman of the Derg, the socialist military junta that governed Ethiopia, from 1977 to 1987, and the president of the People's Democratic Republic of Ethiopia (PDRE) from 1987 to 1991.The Derg took power in the Ethiopian Revolution following the overthrow of Emperor Haile Selassie I in 1974, marking the end of the Solomonic dynasty which had ruled Ethiopia since the 13th century. Mengistu purged rivals for power from the Derg and made himself dictator of Ethiopia, attempting to modernize the feudal economy of Ethiopia through Marxist-Leninist-inspired policies such as nationalization and land redistribution. Read more on Wikipedia

Mengistu Haile Mariam was the president of Ethiopia from 1974 to 1991. He was most famous for being the leader of the Derg, a Marxist military junta that overthrew Emperor Haile Selassie.

Among politicians, Mengistu Haile Mariam ranks 1,535 out of 15,577. Before him are Juba II, Hippias, Jiang Ziya, Ferdinand I of Aragon, Philip V of Macedon, and John II of Castile. After him are Minamoto no Yoritomo, Ferdinand I of León, Theuderic I, Abaqa Khan, Ioannis Metaxas, and Raisa Gorbacheva.