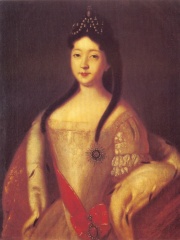 Grand Duchess Anna Petrovna of Russia (Russian: А́нна Петро́вна; 27 January 1708 – 4 March 1728) was the eldest daughter of Emperor Peter I of Russia and his wife Empress Catherine I. Her younger sister, Empress Elizabeth, ruled between 1741 and 1762. While a potential heir in the reign of her nephew Peter II, she never acceded to the throne due to political reasons. Read more on Wikipedia

Anna was the daughter of czar alexander ii and his wife, empress maria aleksandrovna. She married the prince of wales, edward VII, in 1874. She was a popular figure in britain and her death in 1928 was considered a national tragedy.

Among politicians, Grand Duchess Anna Petrovna of Russia ranks 1,238 out of 15,577. Before her are Christian III of Denmark, Tarja Halonen, Magnus Maximus, Elizabeth of Luxembourg, John III Doukas Vatatzes, and Fritz Sauckel. After her are Archduchess Elisabeth Marie of Austria, John, King of Denmark, Léon Degrelle, Senusret III, Wanli Emperor, and Martti Ahtisaari.