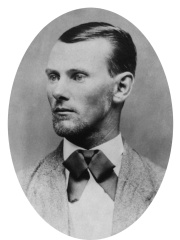 Jesse Woodson James (September 5, 1847 – April 3, 1882) was an American outlaw, bank and train robber, guerrilla and leader of the James–Younger Gang. Raised in the "Little Dixie" area of Western Missouri, James and his family maintained strong Southern sympathies. He and his brother Frank James joined pro-Confederate guerrillas known as "bushwhackers" operating in Missouri and Kansas during the American Civil War. Read more on Wikipedia

Jesse James was a notorious outlaw in the American west. He was born in Missouri in 1847 and died in 1882. He was most famous for robbing trains, banks, and stagecoaches.

Among mafiosos, Jesse James ranks 6 out of 52. Before him are Pablo Escobar, Al Capone, Billy the Kid, Lucky Luciano, and John Dillinger. After him are Salvatore Riina, Jack Ruby, Frank Abagnale, Bernie Madoff, Jeffrey Epstein, and Meyer Lansky.