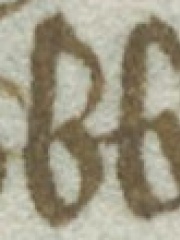 Ubba (Old Norse: Ubbi; died 878) was a 9th-century Viking and one of the commanders of the Great Heathen Army that invaded Anglo-Saxon England in the 860s. The Great Army appears to have been a coalition of warbands drawn from Scandinavia, Ireland, the Irish Sea region and Continental Europe. There is reason to suspect that a proportion of the Viking forces specifically originated in Frisia, where some Viking commanders are known to have held fiefdoms on behalf of the Franks. Read more on Wikipedia

Ubba is most famous for his role in the Battle of Brunanburh, in which he led the Viking forces against the Anglo-Saxons.

Page views of Ubbas by language

Among religious figures, Ubba ranks 326 out of 2,238. Before him are Pope John I, Pope Zachary, Pope Stephen IV, Pope Adrian V, Pope Callixtus I, and Pope Leo IV. After him are Pope Martin I, Sabbatai Zevi, Pope Nicholas IV, Pope Damasus II, Ephrem the Syrian, and James, son of Alphaeus.

Among people born in 1000, Ubba ranks 5. Before him are Pope John XV, Pope Sylvester III, Constantine IX Monomachos, and Pope Gregory VI. After him are Pope Damasus II, Parascheva of the Balkans, Pope John XIV, Michael VI Bringas, Antipope Boniface VII, Ivan Vladislav of Bulgaria, and Saint Emeric of Hungary. Among people deceased in 878, Ubba ranks 1. After him are Áed mac Cináeda and Rhodri the Great.

Among RELIGIOUS FIGURES In Denmark