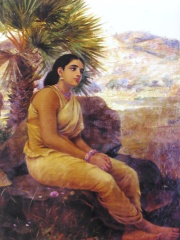 Sita (Sanskrit: सीता; IAST: Sītā) is a Hindu goddess and the female protagonist of the Hindu epic, Ramayana. She is the consort of Rama, the avatar of the god Vishnu and is regarded as a form of Vishnu's wife Lakshmi. She is also the chief goddess of Rama-centric Hindu traditions. Read more on Wikipedia

Sita is most famous for being the wife of Lord Rama in the Hindu epic Ramayana.

Page views of Sitas by language

Among companions, Sita ranks 112 out of 687. Before her are Gala Dalí, Carlos, Prince of Asturias, Anne of Denmark, Adelaide of Italy, Victoria Eugenie of Battenberg, and Julia Domna. After her are Maria of Aragon, Queen of Portugal, Bianca Maria Sforza, Anne of Kiev, Maria Amalia of Saxony, Julia the Elder, and Dinah.

Among COMPANIONS In India