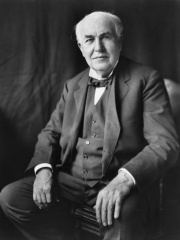 Thomas Alva Edison (February 11, 1847 – October 18, 1931) was an American inventor and businessman who has been described as America's greatest inventor. He developed many devices in fields such as electric power generation, mass communication, sound recording, and motion pictures. These inventions, which include the phonograph, the motion picture camera, and the long-lasting, practical electric light bulb, have had a widespread impact on the modern industrialized world. Read more on Wikipedia

Since 2007, the English Wikipedia page of Thomas Edison has received more than 14,217,984 page views. His biography is available in 166 different languages on Wikipedia making him the 2nd most popular inventor.

Most Popular INVENTORS in Wikipedia