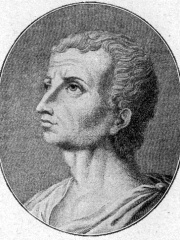 Titus Livius ( LIV-ee-əs, Latin: [ˈtɪtʊs ˈliːwijʊs]; 64/59 BC – AD 12/17), known as Livy ( LIV-ee) in English, was a Roman historian. He wrote a monumental history of Rome and the Roman people, titled Ab Urbe Condita, ''From the Founding of the City'', covering the period from the earliest legends of Rome before the traditional foundation in 753 BC through the reign of Augustus in Livy's own lifetime. Read more on Wikipedia

Since 2007, the English Wikipedia page of Livy has received more than 954,202 page views. His biography is available in 79 different languages on Wikipedia (up from 76 in 2019). Livy is the 6th most popular historian (down from 5th in 2019), the 63rd most popular biography from Italy (up from 75th in 2019) and the most popular Italian Historian.

Page views of Livies by language

Among historians, Livy ranks 6 out of 341. Before him are Herodotus, Ibn Khaldun, Thucydides, Sima Qian, and Tacitus. After him are Xenophon, Josephus, Polybius, Suetonius, Alexis de Tocqueville, and Diodorus Siculus.

Among people born in 59 BC, Livy ranks 1.  Among people deceased in 17, Livy ranks 2. Before him is Ovid. After him are Gaius Julius Hyginus, Thusnelda, Archelaus of Cappadocia, and Antiochus III of Commagene.

Others Born in 59 BC