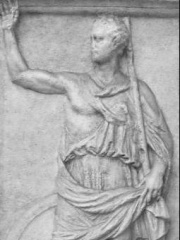 Polybius (; Greek: Πολύβιος, Polýbios; c. 200 – c. 118 BC) was a Greek historian of the Hellenistic period. He is noted for his work The Histories, which covered the period of 264–146 BC and the Punic Wars in detail. Polybius is important for his analysis of the mixed constitution or the separation of powers in government, his in-depth discussion of checks and balances to limit power, and his introduction of "the people", which influenced Montesquieu's The Spirit of the Laws, John Locke's Two Treatises of Government, and the framers of the United States Constitution.The leading expert on Polybius for nearly a century was F. W. Read more on Wikipedia

Since 2007, the English Wikipedia page of Polybius has received more than 1,421,872 page views. His biography is available in 68 different languages on Wikipedia. Polybius is the 9th most popular historian, the 40th most popular biography from Greece (down from 35th in 2019) and the 3rd most popular Greek Historian.

Polybius is most famous for his book The Histories, which is a description of the rise of Rome from the end of the Second Punic War to the defeat of Carthage in the Third Punic War.

Page views of Polybiuses by language

Among historians, Polybius ranks 9 out of 339. Before him are Thucydides, Xenophon, Tacitus, Livy, Sima Qian, and Josephus. After him are Suetonius, Alexis de Tocqueville, Diodorus Siculus, Thomas Kuhn, Manetho, and Hecataeus of Miletus.

Others Deceased in 126 BC