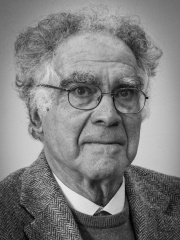 Carlo Ginzburg (Italian: [ˈkarlo ˈɡintsburɡ]; born April 15, 1939) is an Italian historian and proponent of the field of microhistory. He is best known for Il formaggio e i vermi (1976, English title: The Cheese and the Worms), which examined the beliefs of an Italian heretic, Menocchio, from Montereale Valcellina. In 1966, he published The Night Battles, an examination of the benandanti visionary folk tradition found in sixteenth- and seventeenth-century Friuli in northeastern Italy. Read more on Wikipedia

Carlo Ginzburg is most famous for his book, "The Cheese and the Worms: The Cosmos of a Sixteenth-Century Miller," which explores the life of a miller in sixteenth-century Friuli, Italy.

Among historians, Carlo Ginzburg ranks 73 out of 339. Before him are Al-Baladhuri, Nicolaus of Damascus, Johann Jakob Bachofen, Al-Dhahabi, Movses Khorenatsi, and Erich Auerbach. After him are Eutropius, Donna Haraway, Julius Wellhausen, Ephorus, Timaeus, and Yuval Noah Harari.