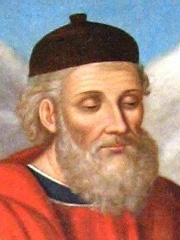 Diodorus Siculus (; Koinē Greek: Διόδωρος Σικελιώτης Diodoros Sikeliotes) (fl. 1st century BC) or Diodorus of Sicily was an ancient Greek historian. He is known for writing the monumental universal history Bibliotheca historica, in forty books, fifteen of which survive intact, between 60 and 30 BC. The history broke new ground in not being Hellenocentric, partly because of Stoic influences on his belief in the brotherhood of all men.The history is arranged in three parts. Read more on Wikipedia

Among historians, Diodorus Siculus ranks 12 out of 341. Before him are Livy, Xenophon, Josephus, Polybius, Suetonius, and Alexis de Tocqueville. After him are Thomas Kuhn, Procopius, Saxo Grammaticus, Mircea Eliade, Cassius Dio, and Manetho.

Among people born in 90 BC, Diodorus Siculus ranks 2. Before him is Zechariah. After him are Publius Clodius Pulcher, Gnaeus Pompeius Trogus, Anna the Prophetess, Phraates IV, Aulus Hirtius, Gaius Scribonius Curio, Pompeia, Gaius Antonius Hybrida, Trebonius, and Ariobarzanes II of Cappadocia. Among people deceased in 30 BC, Diodorus Siculus ranks 4. Before him are Cleopatra, Mark Antony, and Caesarion. After him are Hyrcanus II, Gnaeus Domitius Ahenobarbus, and Marcus Antonius Antyllus.