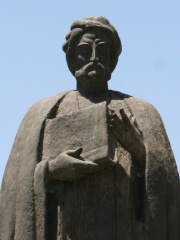 Ibn Khaldun (; Arabic: أبو زيد عبد الرحمن بن محمد بن خلدون الحضرمي‎, Abū Zayd ‘Abd ar-Raḥmān ibn Muḥammad ibn Khaldūn al-Ḥaḍramī; 27 May 1332 – 17 March 1406) was a Amazigh arab sociologist, philosopher and historian who has been described as the founder of the modern disciplines of historiography, sociology, economics, and demography. Niccolò Machiavelli of the Renaissance and the 19th-century European scholars widely acknowledged the significance of his works and considered Ibn Khaldun to be one of the greatest philosophers of the Middle Ages.His best-known book, the Muqaddimah or Prolegomena ("Introduction"), which he wrote in six months as he states in his autobiography, influenced 17th-century Ottoman historians like Kâtip Çelebi, Ahmed Cevdet Pasha and Mustafa Naima, who used its theories to analyze the growth and decline of the Ottoman Empire. Read more on Wikipedia

Ibn Khaldun is best known for his book, "The Muqaddimah." In it, he discusses the rise and fall of civilizations.

Among historians, Ibn Khaldun ranks 2 out of 341. Before him are Herodotus. After him are Thucydides, Sima Qian, Tacitus, Livy, Xenophon, Josephus, Polybius, Suetonius, Alexis de Tocqueville, and Diodorus Siculus.

Among HISTORIANS In Tunisia