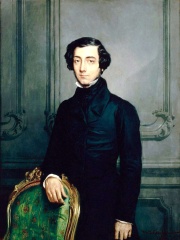 Alexis Charles Henri Clérel, comte de Tocqueville (French: [a.lɛk.si‿də tɔk.vil]; 29 July 1805 – 16 April 1859), colloquially known as Tocqueville (), was a French aristocrat, diplomat, political scientist, political philosopher and historian. He is best known for his works Democracy in America (appearing in two volumes, 1835 and 1840) and The Old Regime and the Revolution (1856). In both, he analyzed the living standards and social conditions of individuals as well as their relationship to the market and state in Western societies. Read more on Wikipedia

Alexis de Tocqueville is most famous for his book "Democracy in America." He traveled to the United States in 1831 and wrote a book about his experiences.

Among historians, Alexis de Tocqueville ranks 11 out of 339. Before him are Tacitus, Livy, Sima Qian, Josephus, Polybius, and Suetonius. After him are Diodorus Siculus, Thomas Kuhn, Manetho, Hecataeus of Miletus, Procopius, and Cassius Dio.