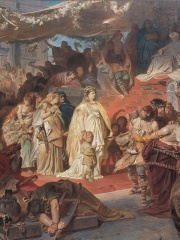 Thusnelda (c. 10 BC – unknown) was a Germanic Cheruscan noblewoman who was captured by the Roman general Germanicus during his invasion of Germania. She was the wife of Arminius. Read more on Wikipedia

Page views of Thusneldas by language

Among politicians, Thusnelda ranks 6,995 out of 15,710. Before her are Pierre Napoléon Bonaparte, Emperor Fei of Jin, Martin Rees, Titu Cusi, Khaleda Zia, and Kaleb of Axum. After her are Phaedon Gizikis, Bernhard Schmidt, Wang Hongwen, Nicholas Murray Butler, Tugay Bey, and Hajime Sugiyama.

Among people born in 100 BC, Thusnelda ranks 40. Before her are Quintus Caecilius Metellus Pius Scipio Nasica, Tigranes III, Tacfarinas, Orodes III of Parthia, Quintus Pedius, and Sulpicia. After her are Amanishakheto, Servius Sulpicius Rufus, Cassivellaunus, Gnaeus Calpurnius Piso, Tiridates II of Parthia, and Quintus Labienus. Among people deceased in 17, Thusnelda ranks 4. Before her are Ovid, Livy, and Gaius Julius Hyginus. After her are Archelaus of Cappadocia and Antiochus III of Commagene.