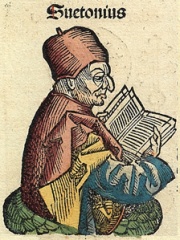 Gaius Suetonius Tranquillus (Latin: [ˈɡaːiʊs sweːˈtoːniʊs traŋˈkᶣɪlːʊs]), commonly referred to as Suetonius ( swih-TOH-nee-əs; c. AD 69 – after AD 122), was a Roman historian who wrote during the early Imperial era of the Roman Empire. His most important surviving work is a set of biographies of 12 successive Roman rulers, from Julius Caesar to Domitian, properly titled De vita Caesarum. Read more on Wikipedia

Since 2007, the English Wikipedia page of Suetonius has received more than 971,738 page views. His biography is available in 67 different languages on Wikipedia (up from 66 in 2019). Suetonius is the 10th most popular historian, the 181st most popular biography from Italy (down from 159th in 2019) and the 2nd most popular Italian Historian.

Suetonius was a Roman historian and author who wrote about the lives of the Julio-Claudian dynasty. He is most famous for his work, "The Twelve Caesars," which chronicles the lives of Julius Caesar, Augustus, Tiberius, Caligula, Claudius, Nero, Galba, Otho, Vitellius, Vespasian, Titus, and Domitian.

Page views of Suetoniuses by language

Among historians, Suetonius ranks 10 out of 339. Before him are Xenophon, Tacitus, Livy, Sima Qian, Josephus, and Polybius. After him are Alexis de Tocqueville, Diodorus Siculus, Thomas Kuhn, Manetho, Hecataeus of Miletus, and Procopius.