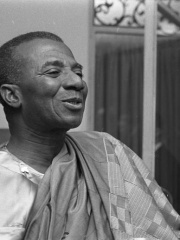 Sylvanus Épiphanio Olympio (French pronunciation: ​[silvany epifanjo ɔlɛ̃pjo]; 6 September 1902 – 13 January 1963) was a Togolese politician who served as prime minister, and then president, of Togo from 1958 until his assassination in 1963. He came from the important Olympio family, which included his uncle Octaviano Olympio, one of the richest people in Togo in the early 1900s. After graduating from the London School of Economics, he worked for Unilever and became the general manager of the African operations of that company. Read more on Wikipedia

Among politicians, Sylvanus Olympio ranks 5,882 out of 15,577. Before him are Joschka Fischer, Shar-Kali-Sharri, Princess Margaret of Prussia, Jan Zamoyski, Prince Adalbert of Bavaria, and Santiago Carrillo. After him are Nebuchadnezzar IV, Hashim Thaçi, Itzcoatl, Charles the Child, George IV of Georgia, and Devlet Hatun.