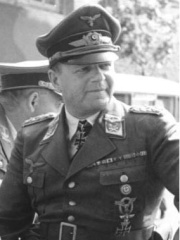 Erhard Milch (30 March 1892 – 25 January 1972) was a German general field marshal (Generalfeldmarschall) of Jewish heritage who oversaw the development of the German air force (Luftwaffe) as part of the re-armament of Nazi Germany following World War I. He was State Secretary in the Reich Ministry of Aviation and Inspector General of the Air force. During most of World War II, he was in charge of all aircraft production and supply. He was convicted of war crimes and crimes against humanity during the Milch Trial, which was held before a U.S. military court in 1947, and sentenced to life imprisonment. Read more on Wikipedia

Erhard Milch was a German general in the Luftwaffe and Minister of Aviation during the Nazi era. He is most famous for his service as the head of the Luftwaffe during World War II.