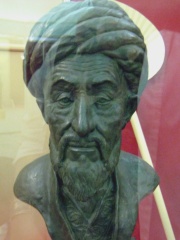 Shah Rukh or Shahrukh (Persian: شاهرخ, Šāhrokh) (20 August 1377 – 13 March 1447) was the ruler of the Timurid Empire between 1405 and 1447. He was the son of the Central Asian conqueror Timur (Tamerlane), who founded the Timurid dynasty in 1370. However, Shah Rukh ruled only over the eastern portion of the empire established by his father, comprising most of Persia and Transoxiana, the western territories having been lost to invaders in the aftermath of Timur's death. Read more on Wikipedia

Shah Rukh Khan is one of the most famous actors in the world. He is most famous for his starring role in the film Dilwale Dulhania Le Jayenge, which is considered to be one of the best Indian films of all time.

Among politicians, Shah Rukh ranks 1,576 out of 15,577. Before him are Béla III of Hungary, Lazar Kaganovich, Kurt Schuschnigg, Anchises, Romanos I Lekapenos, and Jeconiah. After him are Ferdinand I of Naples, Zviad Gamsakhurdia, Rudolf IV, Duke of Austria, Kwame Nkrumah, Æthelwulf, King of Wessex, and Babrak Karmal.

Among people born in 1377, Shah Rukh ranks 3. Before him are Filippo Brunelleschi and Jianwen Emperor. After him are Ernest, Duke of Austria, Ladislaus of Naples, Süleyman Çelebi, Đurađ Branković, Louis II of Anjou, Albert IV, Duke of Austria, Emperor Go-Komatsu, Afonso I, Duke of Braganza, and Oswald von Wolkenstein. Among people deceased in 1447, Shah Rukh ranks 3. Before him are Pope Eugene IV and Vlad II Dracul. After him are Masolino da Panicale, Filippo Maria Visconti, Mircea II of Wallachia, Antipope Clement VIII, Henry Beaufort, Louis VII, Duke of Bavaria, Colette of Corbie, and Humphrey, Duke of Gloucester.