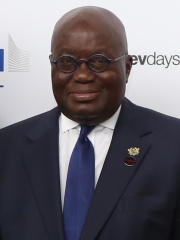 Nana Addo Dankwa Akufo-Addo ( (listen) a-KUUF-oh ah-DOH; born 29 March 1944) is a Ghanaian politician who is the current president of the Republic of Ghana. He has been in office since 7 January 2017. He was re-elected for his second term which will end on January 6, 2025.Akufo-Addo previously served as Attorney General from 2001 to 2003 and as Minister for Foreign Affairs from 2003 to 2007 under the Kufuor-led administration. Read more on Wikipedia

Among politicians, Nana Akufo-Addo ranks 7,372 out of 15,710. Before him are Yael Dayan, Joan of France, Duchess of Brittany, Malietoa Tanumafili II, Frederick, Duke of Bohemia, Manuel Marulanda, and Motilal Nehru. After him are Bernd Rosemeyer, Andrej Kiska, Kimon Georgiev, Emperor Mu of Jin, Pietro I Candiano, and Munjamyeong of Goguryeo.