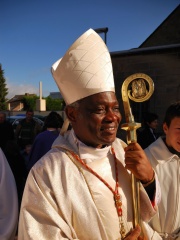 Peter Kodwo Appiah Turkson (born 11 October 1948) is a Ghanaian cardinal of the Catholic Church. He was president of the Pontifical Council for Justice and Peace from 24 October 2009 to 1 January 2017. Pope Francis named him the first Prefect of the Dicastery for the Promotion of Integral Human Development, which began operations on 1 January 2017, and a post he continues to hold at present. Read more on Wikipedia

Among religious figures, Peter Turkson ranks 1,609 out of 2,272. Before him are Francisco Álvarez Martínez, Mario Aurelio Poli, Stephen Kim Sou-hwan, Bezalel, Sabbas the Goth, and Pierre Robert Olivétan. After him are Giovanni Coppa, Maurizio Malvestiti, Plutarch of Byzantium, Abercius of Hieropolis, Corrado Bafile, and Domenico Bartolucci.

Among RELIGIOUS FIGURES In Ghana

Among religious figures born in Ghana, Peter Turkson ranks 1. After him are Peter Poreku Dery (1918).