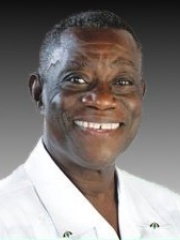 John Evans Fiifi Atta Mills (21 July 1944 – 24 July 2012) was a Ghanaian politician and legal scholar who served as President of Ghana from 2009 until his death in 2012. He was inaugurated on 7 January 2009, having defeated the governing party candidate Nana Akufo-Addo in the 2008 election. He was previously the Vice-President from 1997 to 2001 under President Jerry Rawlings, and he contested unsuccessfully in the 2000 and 2004 presidential elections as the candidate of the National Democratic Congress (NDC). Read more on Wikipedia

Among politicians, John Atta Mills ranks 11,384 out of 15,710. Before him are Atticus of Constantinople, Georgios Kountouriotis, Thrasymedes, Ramón Castro Ruz, Philippe Cattiau, and Mike Moore. After him are Konstantinos Paspatis, Samuel Schmid, Uchida Kōsai, Marduk-apla-iddina I, Hong Song-nam, and Ángel María Villar.