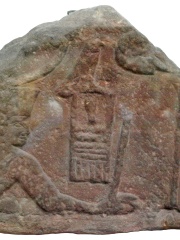 Sanakht (also read as Hor-Sanakht) is the Horus name of an ancient Egyptian king (pharaoh) of the Third Dynasty during the Old Kingdom. His chronological position is highly uncertain (though he is more likely to have reigned towards the end of the dynasty), and it is also unclear under which Hellenized name the ancient historian Manetho could have listed him. Many Egyptologists connect Sanakht with the Ramesside cartouche name Nebka. Read more on Wikipedia

Since 2007, the English Wikipedia page of Sanakht has received more than 95,859 page views. His biography is available in 34 different languages on Wikipedia. Sanakht is the 1,802nd most popular politician (down from 1,568th in 2019), the 103rd most popular biography from Egypt (down from 94th in 2019) and the 46th most popular Egyptian Politician.

Sanakht is most famous for being the first Pharaoh of the Third Dynasty.

Page views of Sanakhts by language

Among politicians, Sanakht ranks 1,802 out of 15,710. Before him are Michael VI Bringas, Sirimavo Bandaranaike, Princess Sibylla of Saxe-Coburg and Gotha, Michael V Kalaphates, Yu the Great, and Fanny Kaplan. After him are Carloman, Archduchess Maria Elisabeth of Austria, Publius Clodius Pulcher, James IV of Scotland, Abd al-Rahman II, and Sheikh Mujibur Rahman.