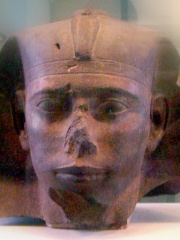 Djedefre (also known as Djedefra and Radjedef – Modern Greek: Ρετζεντέφ) was an ancient Egyptian king (pharaoh) of the 4th Dynasty during the Old Kingdom. He is well known by the Hellenized form of his name Rhatoisēs (Ῥατοίσης) by Manetho. Djedefre was the son and immediate throne successor of Khufu, the builder of the Great Pyramid of Giza; his mother is not known for certain. Read more on Wikipedia

Since 2007, the English Wikipedia page of Djedefre has received more than 222,484 page views. His biography is available in 43 different languages on Wikipedia (up from 42 in 2019). Djedefre is the 907th most popular politician (up from 939th in 2019), the 61st most popular biography from Egypt and the 28th most popular Egyptian Politician.

Djedefre is most famous for being the son of Khufu and the father of Khafre. He was the second king of the 4th dynasty and ruled for about 12 years.

Page views of Djedefres by language

Among politicians, Djedefre ranks 907 out of 15,710. Before him are Vlad II Dracul, Guangxu Emperor, Hassan Rouhani, Barbara of Cilli, Amenhotep II, and Sibylla, Queen of Jerusalem. After him are Elisabeth of France, Archduke Karl Ludwig of Austria, Benjamin Disraeli, Mindaugas, Maximilian I Joseph of Bavaria, and Rehoboam.