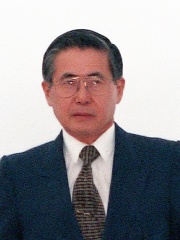 Alberto Kenya Fujimori Inomoto (Spanish: [alˈβeɾto fuxiˈmoɾi] or [alˈβ̞eɾ.t̪o fu(ɟ)ʝiˈmoɾi]; Japanese: 藤森謙也, born 28 July 1938) is a Peruvian statesman, professor and former engineer who led the nation as the President of Peru from 28 July 1990 until his downfall on 22 November 2000. Frequently described as a dictator, he remains a controversial figure in Peruvian politics; his government is credited with the creation of Fujimorism, defeating the Shining Path insurgency and restoring Peru's macroeconomic stability, though Fujimori ended his presidency by fleeing Peru for Japan amid a major scandal involving corruption and human rights abuses. Even amid his prosecution in 2008 for crimes against humanity relating to his presidency, two-thirds of Peruvians polled voiced approval for his leadership in that period.A Peruvian of Japanese descent, Fujimori took refuge in Japan when faced with charges of corruption in 2000. Read more on Wikipedia

Alberto Fujimori was the president of Peru from 1990 to 2000. He is most famous for his economic reforms, which stabilized the economy and led to a period of growth.

Among politicians, Alberto Fujimori ranks 929 out of 15,710. Before him are Augustus III of Poland, Feodor III of Russia, Lentulus Batiatus, Carol II of Romania, Ferdinand VII of Spain, and Nikephoros III Botaneiates. After him are Ferdinand I of the Two Sicilies, Emperor Yao, Saud of Saudi Arabia, Taejong of Joseon, Islam Karimov, and Wilhelm Pieck.