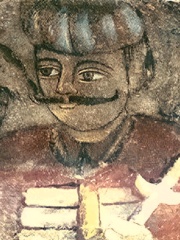 Vlad II (Romanian: Vlad al II-lea), also known as Vlad Dracul (Vlad al II-lea Dracul) or Vlad the Dragon (before 1395 – November 1447), was Voivode of Wallachia from 1436 to 1442, and again from 1443 to 1447. He is internationally known as the father of Vlad the Impaler, or Dracula. Born an illegitimate son of Mircea I of Wallachia, he spent his youth at the court of Sigismund of Luxembourg, who made him a member of the Order of the Dragon in 1431 (hence his sobriquet). Read more on Wikipedia

Vlad II, also known as Vlad the Impaler, was a prince of Wallachia. Vlad II is most famous for his brutal methods of torturing and executing his enemies.

Among politicians, Vlad II Dracul ranks 835 out of 15,577. Before him are Stefan Dušan, Ancus Marcius, Christian IV of Denmark, Gordian III, Emperor Gaozu of Tang, and Todor Zhivkov. After him are Charles XI of Sweden, Charles XIII of Sweden, Olaf II of Norway, Wilhelm Pieck, Henry III, Holy Roman Emperor, and Nur ad-Din.

Among people born in 1395, Vlad II Dracul ranks 2. Before him is Jan van Eyck. After him are Pisanello, Michelle of Valois, Jacques Cœur, George of Trebizond, Niccolò de' Conti, Gianfrancesco I Gonzaga, Marquess of Mantua, Margaret of Prades, Catherine of Brunswick-Lüneburg, and Tristão Vaz Teixeira. Among people deceased in 1447, Vlad II Dracul ranks 2. Before him is Pope Eugene IV. After him are Shah Rukh, Masolino da Panicale, Filippo Maria Visconti, Mircea II of Wallachia, Antipope Clement VIII, Henry Beaufort, Louis VII, Duke of Bavaria, Colette of Corbie, and Humphrey, Duke of Gloucester.