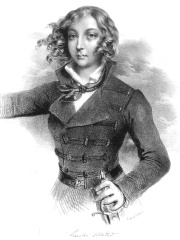 Countess Emilia Broel-Plater (Lithuanian: Emilija Pliaterytė; 13 November 1806 – 23 December 1831) was a Polish–Lithuanian noblewoman and revolutionary from the lands of the partitioned Polish–Lithuanian Commonwealth. Raised in a patriotic tradition in Līksna near Daugavpils, she fought in the November Uprising of 1830–1831 against the Russian Empire. She raised a small unit, participated in several engagements in present-day Lithuania, and received the rank of captain in the Polish insurgent forces. Read more on Wikipedia

Emilia Plater is most famous for being a Polish-Lithuanian writer and journalist. She was a member of the Polish resistance movement during World War II.

Among SOCIAL ACTIVISTS In Lithuania

Among social activists born in Lithuania, Emilia Plater ranks 2. Before her are Emma Goldman (1869). After her are Klara Zamenhof (1863) and Romas Kalanta (1953).