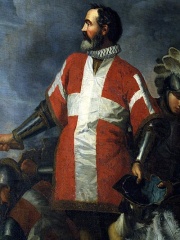 Fra' Jean "Parisot" de la Valette (4 February 1495[?] – 21 August 1568) was a French nobleman and 49th Grand Master of the Order of Malta, from 21 August 1557 to his death in 1568. As a Knight Hospitaller, joining the order in the Langue de Provence, he fought with distinction against the Turks at Rhodes. As Grand Master, Valette became the Order's hero and most illustrious leader, commanding the resistance against the Ottomans at the Great Siege of Malta in 1565, sometimes regarded as one of the greatest sieges of all time.The foundation stone of Valletta was laid by Grandmaster La Valette in 1566. Read more on Wikipedia

Jean Parisot de Valette was a French nobleman and the Grand Master of the Knights of Malta. He led the knights in defending Malta from the Ottoman Empire in 1565.

Among politicians, Jean Parisot de Valette ranks 1,837 out of 15,710. Before him are Walther Rathenau, Quintus Sertorius, Cristina Fernández de Kirchner, Ignacy Jan Paderewski, Hyejong of Goryeo, and Brasidas. After him are Ellac, Stefan Lazarević, King Wu of Zhou, Sigurd the Crusader, Kim Jong-suk, and William IV, Prince of Orange.