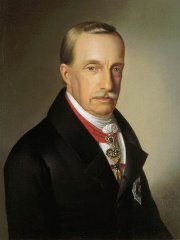 Archduke Joseph Anton Johann of Austria (German: Erzherzog Joseph Anton Johann Baptist von Österreich, Hungarian: Habsburg József Antal János Baptista főherceg, József nádor, 9 March 1776 – 13 January 1847) was the 103th and penultimate palatine of Hungary who served for more than 50 years from 1796 to 1847, after he had been appointed governor in 1795. The latter half of his service coincided with the Hungarian Reform Era, and he mediated between Francis I, King of Hungary and the Hungarian nobility, representing the country's interests in Vienna. He played a prominent role in the development of Pest as a cultural and economic centre, and the neoclassical buildings constructed on his initiative define the modern appearance of the city. Read more on Wikipedia

Archduke Joseph, Palatine of Hungary, was the youngest son of Empress Maria Theresa and Emperor Francis I. He was born in Vienna on October 22, 1741. He was educated by Jesuits and became a devout Catholic. He was the Palatine of Hungary from 1764 to 1790. He was a patron of the arts and sciences and founded the Hungarian Academy of Sciences. He died on July 13, 1790 in Vienna.

Page views of Archduke Joseph, Palatine of Hungaries by language

Among politicians, Archduke Joseph, Palatine of Hungary ranks 2,235 out of 15,577. Before him are Aurelius Victor, Halimah Yacob, Theuderic III, Charlotte of Mecklenburg-Strelitz, Arthur Liebehenschel, and Sophie of France. After him are George Curzon, 1st Marquess Curzon of Kedleston, Aeschines, Shalmaneser I, Rudolf von Laban, Roman Herzog, and Jehoram of Israel.