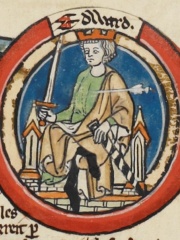 Edward, often referred to by his epithet Edward the Martyr (Old English: Eadweard, pronounced [ˈæːɑdwæɑrˠd]; c. 962 – 18 March 978) was King of the English from 975 until he was murdered in 978. Edward was the eldest son of King Edgar the Peaceful but was not his father's acknowledged heir. On Edgar's death, the leadership of England was contested, with some supporting Edward's claim to be king and others supporting his younger half-brother Æthelred the Unready, recognised as a legitimate son of Edgar. Read more on Wikipedia

Edward the Martyr was the son of King Edmund Ironside and grandson of King Æthelred the Unready. He was murdered in 978 by his half-brother, Eadwig, who then became king.

Page views of Edward the Martyrs by language

Among politicians, Edward the Martyr ranks 1,822 out of 15,710. Before him are Henry II of Castile, Edgar the Peaceful, Ferdinand I of Naples, Charles VIII of Sweden, Richard von Weizsäcker, and Qa'a. After him are Li Keqiang, Ferdinand II of the Two Sicilies, Maria Anna of Savoy, Frederick the Fair, Wang Zhaojun, and Prince Maximilian of Baden.