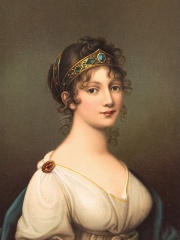 Duchess Louise of Mecklenburg-Strelitz (Luise Auguste Wilhelmine Amalie; 10 March 1776 – 19 July 1810) was Queen of Prussia as the wife of King Frederick William III. The couple's happy, though short-lived, marriage produced nine children, including the future monarchs Frederick William IV of Prussia and Wilhelm I, German Emperor. Her legacy became cemented after her extraordinary 1807 meeting with French Emperor Napoleon I at Tilsit – she met with the emperor to plead unsuccessfully for favorable terms after Prussia's disastrous losses in the Napoleonic Wars. She was already well loved by her subjects, but her meeting with Napoleon led Louise to become revered as "the soul of national virtue". Read more on Wikipedia

Louise of Mecklenburg-Strelitz was Queen of Great Britain and Ireland as the wife of King George III. She was also the mother of Queen Charlotte, who became Queen consort of King George IV.

Page views of Louise of Mecklenburg-Strelitzs by language

Among companions, Louise of Mecklenburg-Strelitz ranks 94 out of 687. Before her are Maria Feodorovna, Hortense de Beauharnais, Athaliah, Elisabeth Farnese, Josephine of Leuchtenberg, and Maria Luisa of Parma. After her are Queen Anne-Marie of Greece, Carlota of Mexico, Margaret of Burgundy, Queen of France, Anna Pavlovna of Russia, Maria Theresa of Naples and Sicily, and Mariana Victoria of Spain.