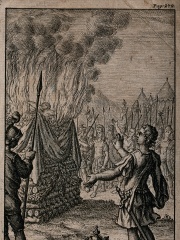 Hippias of Athens (Greek: Ἱππίας ὁ Ἀθηναῖος) was born c. 547 BC and was one of the sons of Peisistratos and a mother whose name and family are unknown. Read more on Wikipedia

Since 2007, the English Wikipedia page of Hippias has received more than 91,954 page views. His biography is available in 28 different languages on Wikipedia. Hippias is the 1,770th most popular politician (down from 1,721st in 2019), the 145th most popular biography from Greece (down from 137th in 2019) and the 51st most popular Greek Politician.

Hippias is most famous for being the head of the Platonic Academy in Athens, Greece.

Page views of Hippias by language

Among politicians, Hippias ranks 1,770 out of 15,710. Before him are Louis II, Prince of Monaco, Cemal Gürsel, Dangun, Emmanuel Philibert, Duke of Savoy, Pupienus, and Faisal II of Iraq. After him are Ḫattušili III, Michael IX Palaiologos, José Antonio Primo de Rivera, Baldwin III of Jerusalem, Archduchess Maria Amalia of Austria, and Coloman, King of Hungary.

Among people born in 600 BC, Hippias ranks 20. Before him are Maya, Pheidippides, Mardonius, Hippasus, Chilon of Sparta, and Thespis. After him are Bias of Priene, Nahum, Cleomenes I, Yaśodharā, Theano, and Datis. Among people deceased in 490 BC, Hippias ranks 2. Before him is Pheidippides. After him are Datis, Yan Hui, and Titus Lucretius Tricipitinus.

Others Deceased in 490 BC