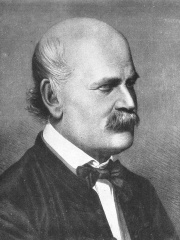 Ignaz Philipp Semmelweis (German: [ˈɪɡnaːts ˈzɛml̩vaɪs]; Hungarian: Semmelweis Ignác Fülöp [ˈsɛmmɛlvɛjs ˈiɡnaːts ˈfyløp]; 1 July 1818 – 13 August 1865) was a Hungarian physician and scientist, who was an early pioneer of antiseptic procedures. Described as the "saviour of mothers", he discovered that the incidence of puerperal fever (also known as "childbed fever") could be drastically reduced by requiring hand disinfection in obstetrical clinics. Puerperal fever was common in mid-19th-century hospitals and often fatal. Read more on Wikipedia

Ignaz Semmelweis was a Hungarian physician who discovered that doctors could reduce the number of women dying in childbirth by washing their hands with a chlorine solution before delivering babies.

Among physicians, Ignaz Semmelweis ranks 17 out of 502. Before him are L. L. Zamenhof, Albert Schweitzer, William Harvey, Li Ching-Yuen, Cyril of Alexandria, and Cesare Lombroso. After him are Alois Alzheimer, Michael Servetus, Nestorius, Pedanius Dioscorides, Jacques Rogge, and Rudolf Virchow.

Among PHYSICIANS In Hungary