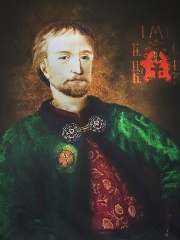 Ivan Stepanovych Mazepa (also spelled Mazeppa; Ukrainian: Іван Степанович Мазепа, Polish: Jan Mazepa Kołodyński; March 30 [O.S. March 20] 1639 – October 2 [O.S. September 21] 1709) served as the Hetman of Zaporizhian Host in 1687–1708. He was awarded a title of Prince of the Holy Roman Empire in 1707 for his efforts for the Holy League. The historical events of Mazepa's life have inspired many literary, artistic and musical works. Read more on Wikipedia

Since 2007, the English Wikipedia page of Ivan Mazepa has received more than 205,895 page views. His biography is available in 39 different languages on Wikipedia making him the 1,258th most popular politician.

Among politicians, Ivan Mazepa ranks 1,252 out of 14,801. Before him are Emperor Wen of Sui, Margaret Theresa of Spain, Scorpion I, Libius Severus, Joe Biden, and Ananda Mahidol. After him are Dorgon, Yeonsangun of Joseon, Gaspard II de Coligny, Berenice IV of Egypt, David Lloyd George, and Almanzor.