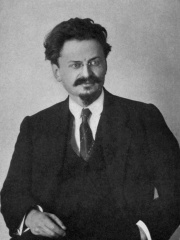 Lev Davidovich Bronstein (7 November [O.S. 26 October] 1879 – 21 August 1940), better known as Leon Trotsky (), was a Ukrainian-Russian Marxist revolutionary, political theorist and politician. Ideologically a communist, he developed a variant of Marxism which has become known as Trotskyism. Born to a wealthy Ukrainian-Jewish family in Yanovka (now Bereslavka), Trotsky embraced Marxism after moving to Mykolaiv in 1896. Read more on Wikipedia

Leon Trotsky was a Russian revolutionary and Marxist theorist. He was instrumental in the October Revolution of 1917, which led to the creation of the Soviet Union. Trotsky later opposed the Stalinist regime and was exiled from the Soviet Union in 1929.

Among politicians, Leon Trotsky ranks 47 out of 15,710. Before him are Richard III of England, Maria Theresa, Martin Van Buren, Peter the Great, John F. Kennedy, and Fidel Castro. After him are Josip Broz Tito, Caligula, Hillary Clinton, Vladimir Putin, Trajan, and Hammurabi.