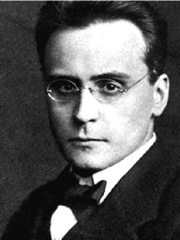 Anton Friedrich Wilhelm von Webern (3 December 1883 – 15 September 1945), now most often known simply as Anton Webern (German: [ˈantoːn ˈveːbɐn] (listen)), was an Austrian composer whose music was among the most radical of its milieu in its sheer concision and steadfast embrace of then novel atonal and twelve-tone techniques. With his mentor Arnold Schoenberg and his colleague Alban Berg, Webern was at the core of those within the broader circle of the Second Viennese School, which included, among others, Theodor W. Adorno, Heinrich Jalowetz, and Ernst Krenek. Little known in the earlier part of his life, mostly as a conductor with mixed reputation, he came to prominence and increasingly high regard as a composer, teacher, vocal coach, choirmaster, and especially as a conductor mostly during Red Vienna. Read more on Wikipedia

Anton Webern is most famous for his use of twelve-tone serialism in his compositions.

Among COMPOSERS In Austria