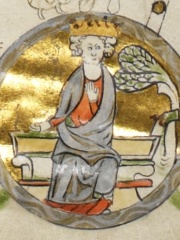 Edmund I (Old English: Ēadmund, pronounced [ˈæːɑdmund]; 921 – 26 May 946) was King of the English from 939 until his death. His epithets include the Elder, the Deed-doer, the Just, and the Magnificent.Edmund was the son of Edward the Elder and his third wife Eadgifu of Kent, and a grandson of Alfred the Great. Edmund was a young child when his father died in 924 and was succeeded by his eldest son and Edmund's half-brother Æthelstan, who died in 939. Read more on Wikipedia

Edmund I was the king of England from 939 to 946. He is most famous for his defeat of the Danes at the Battle of Brunanburh in 937.

Page views of Edmund IS by language

Among politicians, Edmund I ranks 1,471 out of 15,710. Before him are Rutherford B. Hayes, Cuauhtémoc, Francis I of the Two Sicilies, Georgy Lvov, John IV Laskaris, and Ehud Barak. After him are Abel, King of Denmark, Archduchess Sophie of Austria, Emperor Xian of Han, Friedrich Fromm, John Sigismund Zápolya, and Amon of Judah.