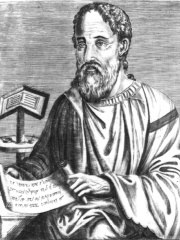 Eusebius of Caesarea (; Greek: Εὐσέβιος Eusebios; c. 260/265 – 30 May 339), also known as Eusebius Pamphilus (from the Greek: Εὐσέβιος τοῦ Παμφίλου), was a Greek historian of Christianity, exegete, and Christian polemicist. In about AD 314 he became the bishop of Caesarea Maritima in the Roman province of Syria Palaestina. Read more on Wikipedia

Since 2007, the English Wikipedia page of Eusebius has received more than 1,038,773 page views. His biography is available in 62 different languages on Wikipedia (down from 63 in 2019). Eusebius is the 111th most popular philosopher (down from 109th in 2019), the 33rd most popular biography from Israel (up from 41st in 2019) and the most popular Philosopher.

Eusebius was a Christian historian who lived from around 260 to 340. He is most famous for writing the Ecclesiastical History, which is a history of the Church from the time of Jesus to the time of Constantine.

Page views of Eusebiuses by language

Among philosophers, Eusebius ranks 111 out of 1,081. Before him are Henri de Saint-Simon, Jacques Derrida, Aristippus, Joseph Priestley, Friedrich Fröbel, and Philo. After him are Pyrrho, Meister Eckhart, Charles Fourier, Gilles Deleuze, John Venn, and Bodhidharma.

Among PHILOSOPHERS In Israel