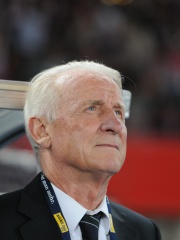 Giovanni Trapattoni (Italian pronunciation: [dʒoˈvanni trapatˈtoːni]; born 17 March 1939), sometimes popularly known as "Trap" or "Il Trap", is an Italian football former manager and former footballer, considered the most successful club coach of Italian football. A former defensive midfielder, as a player he spent almost his entire club career with AC Milan, where he won two Serie A league titles (1961–62 and 1967–68), and two European Cups, in 1962–63 and 1968–69. Read more on Wikipedia

Giovanni Trapattoni is most famous for being the manager of the Republic of Ireland national football team. He has managed the team since 2008, and is currently the longest-serving manager in the team's history.