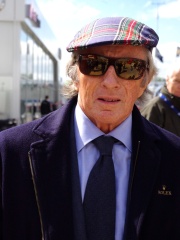 Sir John Young "Jackie" Stewart, (born 11 June 1939) is a British former Formula One racing driver from Scotland. Nicknamed the "Flying Scot", he competed in Formula One between 1965 and 1973, winning three World Drivers' Championships, and twice finishing as runner-up over those nine seasons. He is regarded by many as one of the greatest drivers in the history of the sport.Outside of Formula One, he narrowly missed out on a win at his first attempt at the Indianapolis 500 in 1966, and competed in the Can-Am series in 1970 and 1971. Read more on Wikipedia

Since 2007, the English Wikipedia page of Jackie Stewart has received more than 1,817,319 page views. His biography is available in 54 different languages on Wikipedia making him the 8th most popular racing driver.