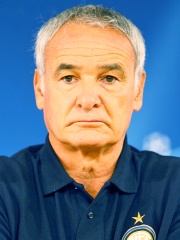 Claudio Ranieri Grande Ufficiale OMRI (Italian: [ˈklaudjo raˈnjeːri, -ˈnjɛː-]; born 20 October 1951) is an Italian football manager and former player who was most recently the head coach of English club Watford. Ranieri began his managerial career in the lower leagues in Italy during the late 1980s, and made his name at Cagliari, whom he took from Serie C1 up to Serie A in successive seasons. He later went on to manage Napoli, where he led the team to qualify for the UEFA Cup, only to be dismissed the following season. Read more on Wikipedia

Claudio Ranieri is most famous for being the Leicester City manager in 2016 when they won the Premier League.