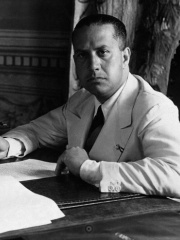 Gian Galeazzo Ciano, 2nd Count of Cortellazzo and Buccari ( CHAH-noh, Italian: [ɡaleˈattso ˈtʃaːno]; 18 March 1903 – 11 January 1944) was an Italian diplomat and politician who served as Foreign Minister in the government of his father-in-law, Benito Mussolini, from 1936 until 1943. During this period, he was widely seen as Mussolini's most probable successor as head of government.He was the son of Admiral Costanzo Ciano, a founding member of the National Fascist Party; father and son both took part in Mussolini's March on Rome in 1922. Ciano saw action in the Italo-Ethiopian War (1935–36) and was appointed Foreign Minister on his return. Read more on Wikipedia

Galeazzo Ciano was an Italian politician and diplomat. He was the Italian Foreign Minister from 1936 to 1943, and Mussolini's son-in-law. He was executed by the partisans in 1944.

Among politicians, Galeazzo Ciano ranks 1,182 out of 15,577. Before him are Roh Moo-hyun, Ælla of Northumbria, Al-Walid I, Túpac Amaru, Decebalus, and Jeongjong of Joseon. After him are Antiochus I Soter, Jefferson Davis, Alexei Rykov, Alexander Kolchak, Vajiralongkorn, and Brennus.