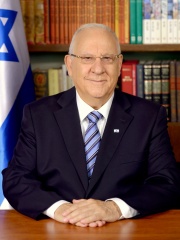 Reuven "Ruvi" Rivlin (Hebrew: רְאוּבֵן "רוּבִי" רִיבְלִין [ʁeʔuˈven ʁivˈlin] (listen); born 9 September 1939) is an Israeli politician and lawyer who served as the tenth president of Israel between 2014 and 2021. He is a member of the Likud party. Rivlin was Minister of Communications from 2001 to 2003, and subsequently served as Speaker of the Knesset from 2003 to 2006 and 2009 to 2013. Read more on Wikipedia

Reuven Rivlin is a former Israeli politician who served as the 10th President of Israel.

Among politicians, Reuven Rivlin ranks 1,305 out of 15,577. Before him are Frederick II of Denmark, Grand Duke Konstantin Pavlovich of Russia, Johann Friedrich Struensee, Gyula Andrássy, Sunjong of Korea, and Amenemhat III. After him are Briseis, Maria Anna of Savoy, Itō Hirobumi, Gregor Strasser, Jacques Necker, and Vladimir II Monomakh.