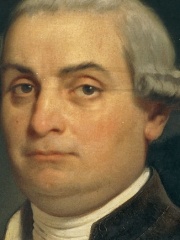 Cesare Bonesana di Beccaria, Marquis of Gualdrasco and Villareggio (Italian: [ˈtʃeːzare bekkaˈriːa, ˈtʃɛː-]; 15 March 1738 – 28 November 1794) was an Italian criminologist, jurist, philosopher, economist and politician, who is widely considered one of the greatest thinkers of the Age of Enlightenment. He is well remembered for his treatise On Crimes and Punishments (1764), which condemned torture and the death penalty, and was a founding work in the field of penology and the Classical School of criminology. Read more on Wikipedia

Among philosophers, Cesare Beccaria ranks 165 out of 1,081. Before him are Adam Weishaupt, Ferdinand Tönnies, Max Stirner, Mikhail Bakhtin, Padmasambhava, and Alcuin. After him are Carl Schmitt, Friedrich Schleiermacher, Maurice Merleau-Ponty, Marshall McLuhan, Paul Ricœur, and Chrysippus.