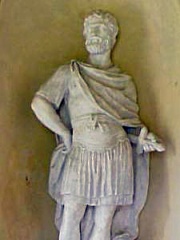 Epaminondas (; Greek: Ἐπαμεινώνδας; 419/411–362 BC) was a Greek general of Thebes and statesman of the 4th century BC who transformed the Ancient Greek city-state, leading it out of Spartan subjugation into a pre-eminent position in Greek politics called the Theban Hegemony. In the process, he broke Spartan military power with his victory at Leuctra and liberated the Messenian helots, a group of Peloponnesian Greeks who had been enslaved under Spartan rule for some 230 years after being defeated in the Messenian War ending in 600 BC. Epaminondas reshaped the political map of Greece, fragmented old alliances, created new ones, and supervised the construction of entire cities. Read more on Wikipedia

Epaminondas was a Theban general and statesman of the 4th century BC. He is most famous for his victory over the Spartans at Leuctra in 371 BC.

Page views of Epaminondas by language

Among politicians, Epaminondas ranks 590 out of 15,577. Before him are Jadwiga of Poland, Anne, Queen of Great Britain, Manuel I Komnenos, Herbert Hoover, Oscar II of Sweden, and Frederick William IV of Prussia. After him are Shah Jahan, Khosrow I, Valens, Darius II, Hans Frank, and Ivan III of Russia.

Others Deceased in 362 BC